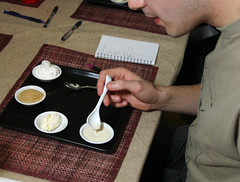 Iron Chef Cream!
Originally uploaded by rstrohmh.
So this past weekend I competed in Iron Chef Medford: Battle Cream!
I think we were actually in Somerville this go-round, but whatever.

So battle cream commenced, with 6 strong contenders.
My entry, as seen in this photo, was an exploration of cream as texture and medium/conveyance for flavor. Left to right - from the judge's perspective - was a cold Caramelized Onion soup (with spoon hovering in photo), a freshly made(!) Lemon Ricotta (as a play on a palate cleanser), a deconstructed beer ice cream (see below), and a single-malt scotch and vanilla-cardamom whipped cream.
So cream as liquid, cheese, ice cream, and whipped cream.

I won!
I was surprised honestly, I didn't think that such a relatively concept driven dish would take the prize, but apparently the judges enjoyed it enough, and the originality and "use of theme" scores put me over the top.

The next two finishers and I were only a point apart, so i was a close thing!

wanderyng1 with some spectacular Pana Cotta with olive tapanade and other amazing ingredients came in second (and didn't bring enough for anyone but the judges! herumph!), and someone I didn't know (Ray?) came in a very close third with an amazingly tasty Crawfish Bisque.

We had much fun, which was the whole point really.
I really wish I had more pictures, especially of the crawfish heads in the soup, but I was too busy putting those plates together to grab photos of everyone's stuff.

Oh! the Deconstructed Beer ice cream...
Amber malt extract in place of sugar, soak Saaz hops in the cream, add some honey and agave nectar to sweeten it a bit more, and toss in a bit of coriander and vanilla/orange extract.
It was definitely interesting, and has potential, but wasn't quite what I'd hoped for.
It will have to be tried again.